skip to main | skip to sidebar

I will never recover from Southeast Asia

I've been overseas for over a year.  Let that sink in.  The anniversary actually hit while I was in Bali over Water Festival, but having another Thanksgiving away from my family made it real.  Sure, I've lived away from home before, but I have always been less than a 26-hour flight away - and thus able to hang out with my family, be inappropriate with my friends from high school, and eat all that delicious home-cooked food over the holidays.  I miss that.


My Board vs. CutiePatootie Instructor's Board 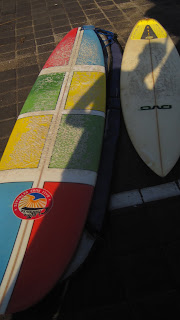 But I guess life isn't so bad. I mean, I *DID* get to learn to surf in Bali.  and it was awesome.  Bali is beautiful, the people are nice, and the challenge of learning a new sport definitely helped channel my sadness over SuperMarine's departure.

It's only been a few weeks since he's been gone, but it feels much longer.  Making long distance work is hard, especially with 15 hour time difference and terrible internet connections on both ends. But we'll make it work...or at least I really hope we do.  It helps having something to look forward to on the horizon - and the time in between jam-packed full of visitors and tons of work to do.  It also seems I've developed a new hobby. I just can't stop baking! It's kind of weird.

SuperMarine, prepare yourself for a baked-goods-filled summer.

This year's water festival brings the Marine Corps Ball, a short workweek, and a trip to Bali...and one big goodbye (for now).


"bittersweet" would be an understatement.
Posted by -LK at Monday, November 07, 2011 No comments:

The dance studio is a success! Or at least it's doing its job.  Most of the time it's just me and the instructor, but it's all good - at least I get to dance again!
Posted by -LK at Monday, October 10, 2011 No comments:

I just received word that the new studio is open!  I'm going blitz on this place starting tomorrow...

Holy cow, it's been a long time

I'm sorry blog, I sort of forgot about you.  It's just that, you know, I've been busy.


So much has happened since my last post, I don't really know where to start.


Let's go with this:


I've become even more thankful for the amazing friends I'm lucky enough to have made in Boston and DC (and K-town).  I got to see a few of them in during their travels - Gordacio and ST in Singapore; Cookie and TeethMoney in BKK; LC and Sleepy in PP, Laos and BKK - and many more during mine.


I took my R&R just over six months into my tour (crazy) and spent some time at home with my family, up in Boston with some friends, and most notably, in Minnesota celebrating the lovefest of two meathead friends.  The jetlag was brutal, but the time with friends and family (and the frequent flier miles) made it worth it.  I was  reminded how unusually lucky I am to have met and befriended such a fun, motivated, silly - and of course ridiculously good-looking - group of people.  I know I made the right decision with my job, but seeing all of them made coming back to PP more difficult that I predicted.


This became particularly obvious when I "celebrated" my birthday without them.  It's in quotes because it was kind of a disaster, but that's neither here nor there.  To be positive, it was inspiring.


Since then, I've been trying to branch out of my PP routine.  I think I've been doing a good job on trying out new restaurants and bars, more successfully since I've changed my attitude towards the people with which I choose to surround myself.  If they're holding me back, they've got to get left behind.


This, unfortunately, is limiting.  In every other stage of my life, I've found refuge within the dance community.  Friendships are easily made, and the people tend to be adventurous goofballs - aka: my type of people.  PP just doesn't have that....yet.  I've heard rumors of a hip hop dance studio opening imminently, but I think I'll have to believe it when I see it.  I really hope I see it.


The holidays this year are once again going to bring drama in my personal life.  I'm glad my family will be around; I think I'll need them.  For long-term sanity, however, I need dance.  Let's hope the Frenchman opening this studio pulls through.  right. now.


I'm a glutton for punishment.

I've been a bit negligent with the blog...my bad.  I'd say it's because I've been too busy, but I think it's because this is starting to actually feel like home an unnecessary to blog about.  Either that, or I've just been putting off writing about spending the holidays overseas, away from my family and the traditions and the cold weather...I don't really know how I feel about it yet.  Despite the dancing saxophone Santas and lights all over Phnom Penh, there's something about the 80 degree weather that made the holiday season surreal.  I couldn't go home for Christmas, so instead I spent the long weekend in Bangkok with some friends, relaxing poolside and enjoying the finer things...you know, public transportation, real stores, walking on sidewalks without getting harassed, etc.

It was a great weekend, but it didn't really feel Christmas-y.  More like the Disney version of it.  Bangkok's Christmas trees, light displays, and constant blasting of holiday music juxtaposed with the country's own Buddhist traditions and hyper-modernism made the whole thing take on a fakeness that I don't think even the US could do without Mickey Mouse.  But all in all, it was a necessary trip and left me wanting more of a city best described to me as the Asian love child of New York and Las Vegas.

And then there's New Years...

Getting away two weekends in a row wasn't really possible... so while half the expat community went down to the beach, I rang in the new year Phnom Penh style: KNG, PCV, MSGs and DD.  It was good times all around, complete with great friends, fireworks way too close to DD, and a giant bag of popcorn.

And now it's 2011.  I'd like to reflect on the differences between the beginning of this year and the beginning of last, but I think so much has changed that it would just be an exercise in spotting the differences.  Back then, I was a little lost - trying to settle into a new apartment, new job and a new life.  Even though I've found myself in the same situation, it seems much easier this time.  I may be far away from everything familiar, but I feel at home...something I never quite got to in DC.  OK, so maybe not *so* much has changed, just my perception of it - but isn't that what really counts?
Posted by -LK at Sunday, January 09, 2011 No comments:

I am NOT lost...just a little confused

-LK
The views expressed here are certainly not authorized by my employer, nor are they meant to represent anything other than my own skewed perception of the world. Read at your own risk.